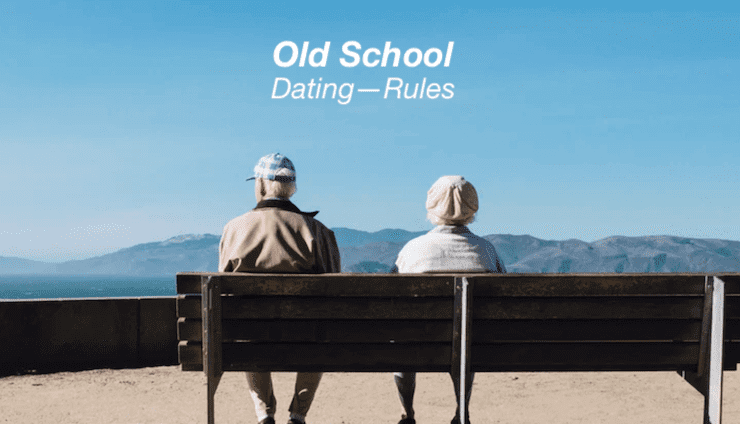 Being born in the mid-80’s, I feel like our generation was blessed to see “the best of both worlds”, meaning that we grew up without the internet and instead we physically played outside with our friends, but as we grew into young adults we started gaining the ability to use technology of all kinds.

We didn’t even have cell phones or the internet when I was a kid, and I was fifteen years old when we finally had WebTV (brownie points for you if you remember WebTV!) and I was so jealous of my best friend at the time who had a pager.

In fact, I feel like my generation was the last generation to experience the “days of old” and all of the old-school traditions of dating, friendships, holiday get-togethers, and just the old-school way of life in general. We were able to get a slight taste of that life, and our parents and grandparents have stories that will bring tears to your eyes every single time.

When it came down to dating and relationships, people in the fifties and sixties seemed to know what they were doing. Even before the fifties these men were courting women in the most respectful way, treating them like queens and in turn, being treated like a king.

But today? It seems as if we all hate each other more than respect each other and a lot of this has come from society itself.

We’ve failed each other at dating and love, we’ve put each other into almost impossible boxes that we can barely make it out of- and it’s time we bring some “old-school” dating etiquette and practices back and revive love again before it’s too late.

Dating Practices to Bring Back in 2021

Oh, yea and the man had to call his woman, not her calling him - ever. There was no such thing as women calling men. And while we don't think that is something we necessarily need to bring back in today's dating practices, men could use a high dose of this old school chivalry for sure.

We all know that texts and messages can be conveyed as rude or can even sound belittling whether you meant it that way or not, and it’s because we can’t hear the voice or see the face behind it. Texts and Facebook have ruined many relationships, all because it’s not forward and can be heard in a totally different context than it was meant to be heard.

While it’s 100% OK to hold the door for your man if you’re walking in front of him, if men would bring the chivalry back they’d be surprised at what all they would get in return. Women are all about emotions and feeling loved and cared for, if they feel loved and cared for, a real woman will reciprocate those actions and give her man what he needs in return.

For your first several dates, and especially the first one or two, it would be a super great idea (and gesture) to bring flowers to her door when you pick her up. Then to take her out to a nice restaurant, and maybe have a couple of drinks after handing her a bouquet of flowers, she'll melt right there in your hands.

Just beware, once her girlfriends hear about her date with you, you might suddenly have vultures trying to swoop in and take advantage of you (and your wallet) just so they can feel what it’s like to date a real man!

Be memorable and different, make actual plans with her on a specific day and at a specific time. Even more so, talk about the exact places you want to go on that date. The fact that you’re putting in so much time and effort to just go on a date with her will make her heart melt and will put you on a pedal stool above the rest in her eyes.

In other words, she might just fall in love with you for being the sweetest and most romantic guy she’s ever met.

Never jump into bed with anyone who says they’ll leave you and not talk to you if you don’t have sex - show them the door!

It was more than just having dinner with them though, you would have to impress their family in more ways than one and more days than just one dinner. Bring her mother flowers, give her father a manly gift, you could even take her little brother out to the park one day. Courting his or her family will make you look like a hero, almost.

It’s also not anyone’s business what’s going on in your personal love life, and it never was, to begin with. Relationships don’t last nearly as long as they used to, and the divorce rate has only gone up since then as well. The internet and the media play a huge role in the demise of many relationships, so don’t kill yours before it even starts.

Dating Practices By the Decade to Revive

Ok, maybe we don’t need films per se’ to teach us about life and love, but it would be nice to have a more educated look at love and sex rather than just shoving the objectification of women and the lust that comes with sex down our throats.

Dating was looked at more so as to who were you going to marry in a few years, rather than how many people can you hook up with today. So to date or court someone then it meant that you really thought you might see yourself marrying that person one day, as time went on.

Having a relationship or even just dating was much more serious to the teenagers and young adults in the ’50s and we think our newer generations could take some notes from them and be a little bit more serious when choosing someone to go out with.

In fact, guys were taught to be gentlemen and it was still common for the guy to call the girl, ask the girl out, pay for dates, etc.

Dating in the ’60s was more casual than formal, but still serious, whereas now we are just out having fun, not caring about what the other person might feel like afterward. People actually cared about others' feelings and dating your girlfriend's ex or your best friends crush was a huge no-no and an abomination to friendships. Can we please bring that mentality back?

Old-Fashioned Dating Practices From Around the World

The U.S. could take notes…

The United States isn’t the only country with romantic people in the world, there are millions of other humans on planet Earth and in many different countries too that have some really amazing, old-fashioned dating practices that we feel the U.S. could stand to inherit as well.

They aren’t allowed to date until they are 15 here in Central and South America, and when they are of age, girls and boys date in large groups to dance parties, local clubs, or just out to eat.

This allows the children to not feel so scared or shy when out on their first (or second) date. Not to mention it probably keeps some other things from happening as well. Kudos to you Central and South America!

In Spain, teens will join a club or pandilla with other teens that have the same interests, like cycling or some other type of sport, or maybe a particular hobby. This is where teens will meet each other and the girls ask guys out just as much as guys as the girls, and they both split the costs of the date. We like equality and providing the kids with something to do, Spain!

If you’re a coffee lover you’re going to love the Swedish way of dating. Fika is coffee in Sweden and the Swedes love going out for coffee when it comes to dating, it’s just “their thing” and what they do when they go out with someone.

In fact, they prefer going out to a coffee shop on a date much more than going to the movies or to dinner.

Perhaps the most beautiful thing about Swedish dating though is the fact that they are super exclusive, even before marriage, and we feel like maybe Americans could take heed to their way of committing to one another.

IN CONCLUSION, it doesn’t matter what decade it is, nor does it matter what country you’re living in, as long as you set boundaries and let your partner that you’re dating know your true intentions beforehand, you’re on the right track.

Dating can be a number of things and you can choose to date as you please, going wheresoever you choose to go. Just be mindful of those who do want something long-term and steady, and don’t toy with anyone’s emotions.

How to Talk to Girls: Basic Approach for Different Scenarios

Tips on How to Create the Perfect Dating Profile

Things to Talk About With Your Girlfriend

The 10 Signs That You're Falling in Love