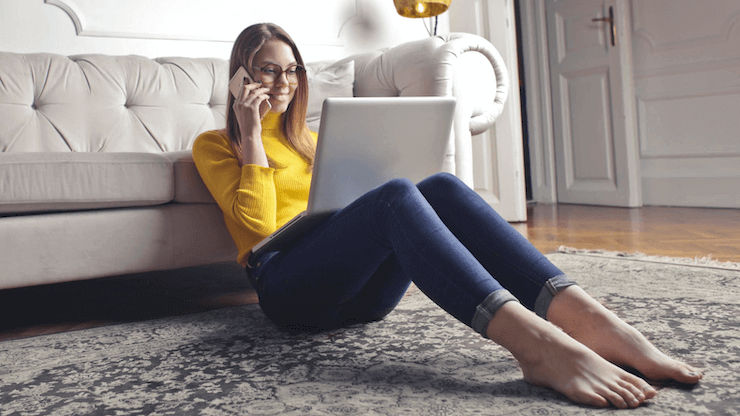 It’s a common scenario: you’re talking to someone you like and the conversation is stalling. You don’t know where to take it, how to keep it going and the awkward silence is killing you.

The biggest problem may not be the awkward silence though, but the fact that being unable to keep a conversation going with someone you like can make you lose the opportunity to take the relationship to the next level.

Sure, not everyone is born a naturally great talker, but everyone can try. The first step to becoming a better conversationalist is to understand the psychology behind the awkward downtime in the middle of conversations.

By understanding what’s causing your “blank mind syndrome”, it’s easier to find a solution to fix it and properly execute strategies to keep a conversation going with the person you adore.

If your mind consistently goes blank in the middle of a conversation, then you understand how frustrating it is when you have to rack your brain in search of something to say.

Yet, the harder you try to come up with something, the less you can think. You really want to keep talking to this person, but you’re not sure how or even what to talk about.

As much as you think otherwise, your lack of communication skills is not because you can’t think fast enough to respond nor because you were born awkward. We run out of things to say because of a cognitive bias called the spotlight effect.

It is when we keep thinking, “Oh crap, everyone is noticing me,” in any given social situation. It’s a psychological phenomenon: people tend to overestimate the attention they are getting from the people surrounding them.

How to Overcome the Blank Mind Syndrome

I know it’s easier said than done. It’s easy for your nervousness to take over the conversation, especially if it’s with someone you really like. However, being nervous won’t do you any good and will only prevent you from having an otherwise amazing conversation.

You can overcome nervousness by reminding yourself that the person you’re talking to is just like you, not an employer who is interviewing you. You don’t have to pressure yourself to say all the right things at the right time.

Instead of focusing inward on your anxiety, practice focusing your attention outwards. This will help you notice how little the other person is actually paying attention to you.

3. Remind Yourself That No One Is Judging You.

This mindset greatly affects how you communicate. When you constantly think that the person you’re talking to is judging every word you say, you tend to hold back the things you want to say in fear of being judged.

4. Stop Overthinking and Just Say What You Want to Say.

Hesitation is the biggest barrier to what could’ve been a great conversation. By hesitating to say what’s in our mind, we allow our overthinking brain to get the best of us. As long as what you’re about to say won’t hurt anyone’s feelings in any way, stop overthinking and just say it. Who knows? It might lead to an amazing discussion.

Fortunately, being a better talker is something you can achieve with a little planning, practice, and mindset shift. Here’s what you can do to avoid awkward downtimes during a phone conversation with someone you like:

It goes without saying that everyone hates shallow small talk. Don’t get me wrong — there’s absolutely nothing wrong with asking “what do you do?” and “what have you been up to this week?” That’s usually how you begin a conversation in the first place.

But if your conversation consists of the same questions over and over again, you definitely need to step up your game if you want the other person to keep talking to you.

One way to initiate deeper conversations is to reveal something slightly personal about yourself. It can be a lot of things, from embarrassing childhood experiences to your personal unpopular opinion.

By revealing something about yourself, you are opening the doors to an intimate conversation that may lead the other person to share something personal about themselves as well. When you start to get to know each other at a deeper level, it’s easy for everything to fall into its place.

One way to keep the conversation going is to get the person talking. Open-ended questions allow the other person to freely express their thoughts, feelings, and/or interests, prompting a longer conversation.

Instead of asking “Do you like your job?”, you can ask “What do you like the most about your job?” Asking the former would only require a yes or no answer while asking the latter would allow the other person to go deeper into the subject and express their feelings on what they like about their job.

For instance, after asking a close-ended question like “Where are you from?”, you can follow up by asking “What was it like growing up in your hometown?”

Ask the charismatic people what keeps a conversation going, and their answer will most probably be the same — sparks. Sparks are certain topics, ideas, or questions that trigger dopamine, getting the person excited.

When you’re talking to someone face-to-face, the primary indicator of spark is the eyebrow raise. But in this case, where the conversation happens over the phone, you can tell when someone is excited when there’s a sudden, high pitch in their voice. You can figure out which topics pique the interest of the person you’re talking to by simply asking questions such as:

“Do you have any big vacation plans coming up?”

“Are you working on any personal passion projects at the moment?”

When you find the sparks, the subject that excites the person you’re talking to, you don’t have to stick with it. But it definitely should serve as the reference on which topics you can talk about in future conversations.

4. Develop a Wide Range of Interests You Can Talk About.

If you spend 99% of your free time watching Game of Thrones, you won’t be able to say much in regards to any other topic. Sure, you have a lot to say about GoT, but you just can’t keep talking about it for the whole week.

You’ll be at a disadvantage during those annoying conversations outside of the HBO series. What you want to aim for is a balance when it comes to interest diversification.

At the top of your head, there should be at least 10 interests you can effortlessly talk about. It can be anything: jazz music, history, podcasting, working out, and more. You don’t have to know about every single topic there is, that’s just impossible.

Just make sure you have a well-rounded set of interests you have knowledge about. Having a wide range of interests you can talk about will make it easy for you to relate not only with the person you’re talking to but with a wide variety of people as well. This is also the secret sauce that makes people seem “interesting” and “knowledgeable”.

The Spokes Method is simply thinking “around” the current topic to come up with something to say. This method works when the person you’re talking to brings up a topic that you have little or no knowledge about.

For example, your partner brings up a mountain biking-related topic, something you're clueless about. You can’t just stonewall them and say, “I don’t want to talk about mountain biking.” Instead, use the Spokes Method to “think around the topic” and mention other things related to mountain biking such as hiking, trails, and good mountain bikes.

You can ask questions such as:

“What is the most challenging trail you’ve ever been on?”

“So, how did you get into mountain biking?”

“What is the most fun mountain biking experience you’ve ever had?”

The key to participating in a conversation where you don’t know much about the topic they’re talking about is to quit attempting to carry the conversation. You don’t always have to take the lead, and it’s something you should keep in mind.

Things to Talk About With a Girl You Like

51 Cheesy Pick-Up Lines to Attract the Person You Want