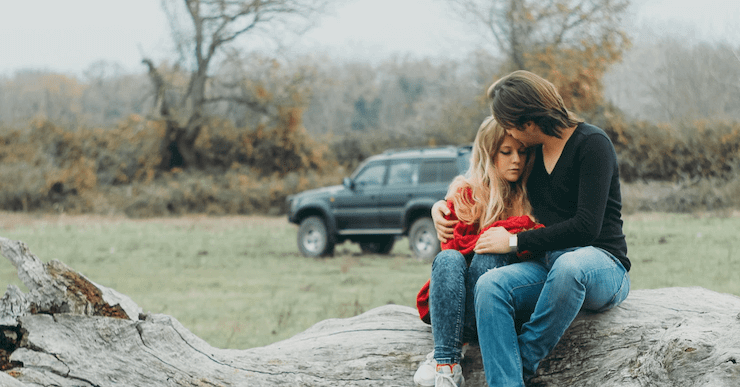 When you’re in any relationship, whether it be romantic or platonic, you must have a certain amount of trust in them, and in the two of you as a partnership, to work out - smoothly.

Especially when it comes to romantic relationships, if you want to have a good, long-term, committed love life, you are going to have to learn to trust each other. No matter the situation and no matter the people they are around.

Love is much more than just trusting your partner though, in fact, they say there are seven main components to a steady and long-lasting love relationship:

The silly saying of “there is no ‘I’ in teamwork” is cliche, but true. One of you could build a mountain, but two of you working together could move them.

You’ve got to talk to each other and I know most guys pretend they hate it but if they would just sit with you one good time and listen with their heart, speak with their brain, and just let you in on their lives too, then you’ll have the perfect recipe for love.

Honesty is a big one because there are some people who will cut you off after your very first lie to them, some will after the second or third, so you’ve got to be very careful about lying, what you lie about, and to what extreme you take it, as you could risk your entire relationship.

Probably the most important characteristic of them all and only because once you master respect you should master the other traits of loving someone correctly. Having respect for another human allows you to give empathetic feelings towards them which then allows you to understand where they’re coming from a lot more than you would if you didn’t respect them.

Think of someone you really can’t stand, it’s because you don’t respect them, and imagine the feelings you have towards them and the way you view them without that respect. If you felt that way about your partner then you mine as well be enemies!

Understanding each other is always essential in a relationship because there are going to be disagreements and one must learn to understand where the other is coming from if you want to have healthy arguments. And not only understanding them in arguments, but also understanding them as a whole, as your lover, and the things they hold dear to their heart.

Which then, of course, brings us back to loving each other. You know how after you’ve been with someone for years and years you can start to lose that loving feeling? Try to get that back if you feel you are losing it or have lost it. Love is only lost when it’s the end and there is no longer a chance to redeem it.

Having a love for each other will almost always surpass everything else but you’ve got to couple it with all of the aforementioned traits as well if you want a long-lasting relationship.

9 Ways to Build Trust in Your Relationship

Since this article is focusing mainly on trust and building trust within your relationship, let’s jump back to some basic but great ways that work to build that trust with your partner.

Remember, building trust is a process and does not happen overnight. That is why you must continue practicing the ways mentioned here so that your relationship does not go stale and you lose all interest.

1. Over Time, Learn to Be Vulnerable With Each Other Again

You are not ever going to have trust without honesty, do you understand? If you lie to someone about anything, even something really small, they are going to find it very hard to trust you over the really big things too. And if you lie about something really big well that could be the end of your relationship then and there.

You need to be like Jim Carey from “Liar, Liar”, not able to tell a lie. Especially if something happened earlier on to break the trust, you’ll need to show him or her that you are able to be trusted again. You won’t be able to prove that while you’re lying all of the time, so learn to be honest. Even when the truth hurts.

It doesn’t only mean a lot to Arethra Franklin but it means a lot to your partner, and you too, if you want to have a good relationship. Hell, you’re even supposed to give strangers and people you don’t know or even like that much respect, so you better damn well give your lover some.

Respect is also much more than just treating them good, it’s about allowing them to make choices on their own without your judgment.

If something happened to break the trust, the one who broke it should show the utmost respect to the one who got hurt, in order for them to reciprocate those feelings. You should never expect the one who got hurt to try and mend things first. This only shows them that they are in it more than you are once again.

4. Give Forgiveness Where It Is Due, and Leave It There

Forgiveness is super important not for the other person, but for you. You can’t allow someone else who hurt you to win and succeed over your life by letting them take over your brain, body, and soul.

However, we hope that whoever broke your trust has given you every reason in the world to forgive them and is showing you everything they can to get you to trust them again. If you haven’t yet, forgive them. If not for them and your relationship, do it for you.

5. Show Them You Are Trying to Win Their Trust...It’s Sexy

When someone pursues you and tries to win you over, it’s super hot and sexy. Who doesn’t want someone fighting for their love? The mere act of fighting for someone’s love and affection alone can cause endorphins and serotonin to kick in and then you’ve got one hot heavy make-up session on the way.

Seriously though, show them you’re pursuing them and trying your damnedest to win their trust. They won’t be able to resist your advances and who knows, you might win their trust just by that alone?

6. Have Emotional Reactions to Real-life Scenes With Him/Her

Basically, don’t be a robot. Show them you have feelings and emotions and show them that a lot of your emotions are sparked from them. This is coupled with being vulnerable because you’re able to let that person in a special part of you that not many people will ever get to in your lifetime.

Let that sink in and then have an emotional heart to heart talk with them about your life together. Chances are your reactions and emotions will spark theirs too.

7. Make Sure It’s Equal in the “Give and Take” Department

As with any relationship, it must be equal when it comes to giving and receiving. Otherwise, the relationship becomes very unequal and it can cause the party doing all of the giving to become very angry and bitter about everything they are doing. Which then, of course, in the end will ruin the whole relationship.

This doesn’t mean that if one person is just super generous and doesn’t mind giving all of the time they should stop, it just means that both parties should watch their give and take and talk about it with each other to make sure you are on the same page.

No matter what anyone says, you are much more of a man or a woman if you can admit your faults and there is something really sexy about people admitting when they are wrong.

Not only is it sexy but it means that the other person has morals and remorse, which then means they don’t want to really hurt you but they are just human and make mistakes rather than a malicious person just ready and willing to hurt you however they see fit.

Even if you are the reason the relationship has broken trust now you still need to admit when you’re wrong in the past, future, present and so should your partner. Show them you can admit your faults and hopefully, they will follow your footsteps.

9. Sacrifice Others and Other Activities for Your Partner

People love knowing they are the apple of someone’s eye, the center of someone else’s world, and if you are trying to gain their trust this is going to be the way you do it.

How to Talk to Girls: Basic Approach for Different Scenarios

Tips on How to Create the Perfect Dating Profile