Is My Girlfriend Cheating? 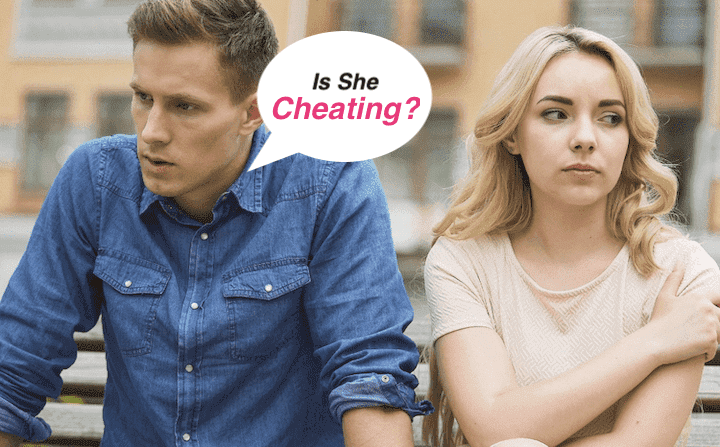 Being cheated upon by someone you love is the worst feeling. It’s such an awful situation that sometimes, you’d rather live in a state of denial than accept the fact that your girlfriend is cheating behind your back. The truth is; it happens all the time – even to seemingly perfect and happy couples.

It usually starts with a little flirtation over chat messages or phone chats and then leads to a full-blown physical relationship. Yes, it’s hurtful and unfair but you have to understand that cheating is a slippery slope. Once you fall for it, it’s extremely hard to recover.

Cheating is hard to justify. No matter how the wheel turns, it’s still cheating. And if you don’t want to end up as the victim of such an act, then it helps to be aware of the sure-fire signs that your girlfriend is cheating on you.

Being sensitive enough to recognize the red flags may not save you from an impending heartbreak, but it can prepare you for what lies ahead. And, more importantly, you get to keep your pride as a man. So the question is; “is my girlfriend cheating?” Let’s find out now with these 13 sure-fire signs.

1. She Makes an Extra Effort to Look Good

If you and your girlfriend have been in a relationship for quite some time now, you are most likely familiar with how she takes care of herself. If she’s putting on some extra effort to look good even on random days, that may be quite suspicious.

A prettier makeup, extra perfume, outfits that are nicer than the usual and change in her physical aura can all mean something – one way or another. You can’t be conclusive but it can keep you wondering what’s with all the extra effort.

We live in a social media age wherein everyone tries to make an impression by posting their best selfies and sometimes, most suggestive photos.

If you notice your girlfriend suddenly becoming more conscious about her image on social media, or becoming extra conscious about her posts, chances are that she has a new “viewer” whom she’s trying to impress or win over. If this is the case, learn how to read between the lines and you might just discover something.

3. Suddenly Points Out at Your Faults

Is she suddenly becoming a fault-finder? If the things that don’t seem to bother her before are now becoming a major deal, then something might just be wrong. You might feel that she’s disgusted with your manner of eating or the fact that you snore really loud or that you have a weak fashion sense.

All of these things could add up and cause pressure in your relationship. And the thing is; they were not considered as problems before. If they suddenly are, then your girlfriend might have found a point of comparison.

4. No Longer Laughs at Your Jokes

If your girlfriend no longer finds you or your jokes funny, then maybe you’ve lost that charm. The question is “why?” There are many reasons. It could be that she has outgrown your humor or her mind is preoccupied with other things.

If you feel that something is off whenever you try to make her laugh, ask her if there’s something that you need to know. Hearing the truth may be far from a joke but it can shorten your agony and spare you from looking pathetic.

5. She Gets Irritated When You Ask Questions

It’s normal for couples to ask each other questions about work, whereabouts and the people they’re with. It’s also normal to ask who they’re talking to on the phone or who they’re chatting with.

For guys, it’s just natural for them to ask their girlfriends who they’re spending time with and who took them home. There’s nothing annoying about making sure that your girlfriend is with a safe company. If she gets irritated whenever you ask questions, consider this a red flag waving at your face.

6. She Hides Her Phone From You

A cheating partner will try to cover all the evidence. A girlfriend who exerts effort to keep her phone from you or keeps it on mute whenever you’re together might just be hiding something.

It doesn’t take a genius to conclude that. If you notice your girlfriend becoming overly protective about her phone and her privacy, then maybe she’s really up to something.

7. She’s No Longer Impressed By You

Are you finding it hard to impress your girl nowadays no matter how hard you try? Don’t ignore the sign because it could mean something. A girlfriend who’s no longer impressed by her boyfriend may have her attention on something else already.

Don’t blame yourself on this. Just keep in mind that people change and sometimes, they outgrow each other. Instead of trying your luck to impress her with another gimmick, acknowledge the problem and find the means to communicate.

8. She Spends Lesser Time With You

There comes a point in a relationship when you feel that you’re no longer a priority for your girlfriend. As a result, she starts to spend less and less time with you.

She starts making excuses like too much work in the office and being tired. She suddenly wants to spend more time with other people or she’d rather be alone. All these things point to a lack of interest in your relationship and you have to recognize that.

9. Intimacy Is Close to Non-existent

No relationship will ever be complete without a healthy sex life or some form of intimacy – even if you’ve been married for 45 years already. But if the interest for “sexy time” stops dead, it could mean a problem.

More than a few weeks or so without sex may not be a big deal for some. However, flat out refusal one night after the other is really a bad sign. Shouldn’t you be wondering why?

Women, in general, are quite vocal about their emotions. They like to communicate how they feel especially towards their partner. But beware; communication is also a double-edged sword.

If she talks about relationship problems, be sensitive about how they’re being laid down. If the seemingly minor issues are coming in way too heavy and fast, then she could be preparing her exit route to break up. Pointing out some relationship problems maybe her strategy of justifying her actions.

11. She Constantly Asks About Your Plans for the Day

Are you wondering why your girlfriend is starting to take interest with your whereabouts and doings? The reason may not be because she’s suddenly wondering what you and your friends are up to or what you’ve been discussing over sports and beers – far from that really.

It may actually be her way of figuring out what she can get away with and for how long. You being busy could mean that she can get busy as well without being caught.

12. She Can’t Give Her Commitment

It is often said that men are the ones who are afraid of commitment. Well, most of them. If you’re one of those who wants get married and stay committed to a partner, you’ll be surprised to find out that the tables have been turned.

Cheating girlfriends are no longer interested in the long-term. Clear enough, they don’t see their future with you. If your girl refuses to discuss anything about marriage and commitment, then you seriously need to assess your relationship.

13. She No Longer Wants to See Your Family and Friends

Detachment could start with anything and with anyone. Do you feel that your girlfriend is slowly detaching herself from people who are associated with you? Is she becoming less and less interested in joining your family events and night out with friends? These are signs of detachment.

If you’re witnessing these signs, it could mean that your relationship is really on the rocks or is going downhill. Instead of being clingy, start discussing this together to shed light on the situation. The sooner you understand; the lesser struggle you’ll have to bear.

The act of cheating is highly subjective. It could be as harmless as fantasizing about someone or as bad as actually having a sexual affair. If you suspect that your girl might be cheating on you, it only means that your relationship is in trouble.

Instead of bombarding her with questions, try to talk things over as calmly as possible. It’s not always easy to admit that things are falling apart but facing the problem head-on can spare you the heartache and frustration in the long run.

Lastly, don’t fall victim to a cheating spree – nobody deserves that whether you’re a man or a woman. The best thing you could do is to shed some light into the truth and work from there.

While this may mean building a “Heartbreak Playlist” over a period of time, there’s nothing much you can do about a failed relationship. If it’s any consolation, keep reminding yourself that you deserve someone who won’t cheat on you behind your back. A real man can take that.

11 Ways to Easily Boost Your Self Confidence With Girls

Reasons Why Women Leave Their Men

How to Forget Someone You Love

8 Ways to Fix Your Relationship After Cheating

10 Signs That Your Relationship Will Succeed