How to Know if a Girl Likes You 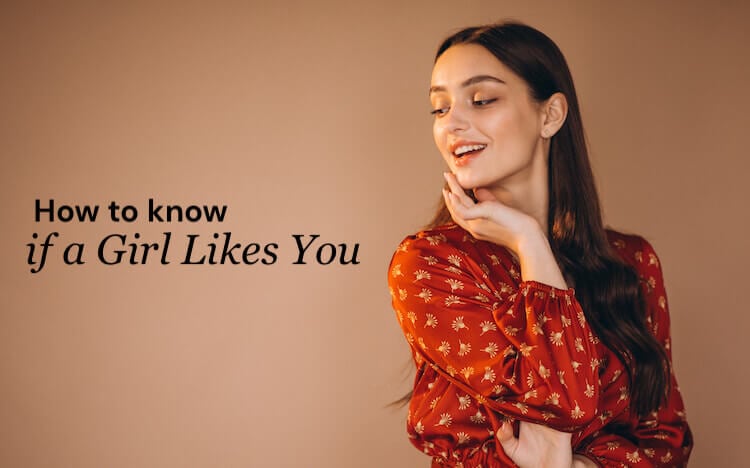 Is there a girl nearby that you aren't sure about? Maybe she's been throwing you some signals lately that you can't read clearly, or you're just too nervous to think about. Girls are very mysterious creatures, and they expect us just to read their minds whenever they want to tell us something with their actions.

They just want you to know what's going on without talking about it, which can be a huge annoyance and a burden on you. It's good to know what the signs are for when a girl is genuinely interested in you.

That way, not only do you save yourself the embarrassment, but you can also shave off lots of endless nights wondering what's going on inside her mind.

Put some of these tips and tricks to the test and see if you have a girl interested in you romantically or just looking for a new best friend to rant about her day too. It's essential to go through each step carefully and try not to skip over anything that may seem important.

1. Does She Talk to You Frequently?

Girls love talking about their days or their lives.

If it's on their mind, they can't stand to talk about it! Is your special little lady extremely excitable when she sees you and spews out every detail about her day to day activities? If so, then this is a vital sign that she's emotionally attached to you.

Girls can be rather shy about their thoughts, but if she's giving you every second of her day in a fast and vivid play by play, then there's a good chance that she thinks of you as something more than just a friend. It's important to keep this in mind when you two interact with each other, but try not to think too strongly on this one fact alone.

After all, if she's communicating with you on a daily basis, it could merely mean that she values you as a close and endearing friend. Try not to get her signals mixed up, or you may be shooting yourself in the foot further down the road.

2. How Does She Act Around Other Girls?

Girls can be very judgemental around other women if they think you're giving away your attention to somebody else. Not only will they go out of their way to assert dominance toward other girls, but they will also try their hardest to make sure you think more highly of them than the other girls.

They might notice little things about the other girls that they don't like, or even go as far as to tell you things they know about them. These are often the worst-case scenarios, though, as all girls are different in their own ways. Many will often try to be close and physical with you around other women and may wrap their hands around yours or touch your shoulders.

Touching you is basically claiming that you are their property, and works in the way of asserting dominance over you as a person. This is a silent sign to other women that you are taken and not on the market for flirting, touching, or crushes.

3. What Does Her Body Do Around You?

Girls do lots of different actions when they are interested in a man. Not only will they act differently toward you than other boys, but they may try to be physically closer to you at all times. If you've noticed a girl growing closer and closer to you over the past few months, It may be time to start going over the list down below to check on any other possible signs.

Is she laughing at your dumbest jokes?

Many girls will go out of their way to make your jokes seem like the greatest things since sliced bread. Whether it's a lame knock-knock joke or some dumb pick-up routine, they're going to find what you say enticing, mesmerizing, and best of all-hilarious!

Whenever you tell a joke amongst your co-workers or friends at school, is she always the only one chuckling at your attempt to make your friends smile? Is she the only person there who is busting up a gut?

Is she touching you?

As we've mentioned, when a girl gives a man lots of physical attention, this can be read as a strong sign that she's interested in you as a romantic partner. Girls usually are very careful about this option, as they don't choose to give too much attention to a guy without thinking of any negative side effects or possibilities.

Guys can quickly get the wrong idea from a simple flirtatious grab of the bicep of a hug from behind, so they don't give these out as freely as compliments.

If she's grabbing you or hugging you a lot, or even finding any little reason under the sun to touch you in some form or fashion, then there's a good chance this girl is growing a crush on you.

Does she get nervous easily?

Girls will overthink every single thing they do around you as a person. Whether they're constantly fussing over their hair or makeup, or pulling at their clothes to make sure everything fits and looks excellent, they're constantly wondering if you're judging them.

They mostly get nervous whenever they do something that puts them in a tight spot or embarrassing situation. Most people will. However, when a girl is put under pressure in front of somebody she's romantically interested in, you're going to see lots of sweat, red faces, and tight fists.

They want you to see them as perfection and think that if you don't, you'll be scared away or uninterested. If you meet a girl that is super careful about how she looks around you, this is a strong sign that she's romantically interested in you as a partner.

Where are her eyes looking?

When you like somebody, eye contact is a huge thing they'll perform. Have you noticed this girl watching you rather closely lately, and observing everything you do? Not only is she trying to study you and learn as much as possible about you, but she's also just falling in love with what she sees.

She gets happy just from looking in your direction, and she may even be wondering if you feel the same way as she does. If you meet her glance and she looks away with a blushed face, this is a strong indication that there's something a little stronger here than friendship.

Does she talk excessively about other guys?

When a girl is interested in a man, she will go out of her way to possibly make him jealous in order to notice her more. This involves actions such as flirting with your best friends, co-workers, and even your siblings. She wants you to notice her, and sometimes, a little jealousy is the only way that this could even happen.

She doesn't necessarily want the attention of the other men she's pursuing, but she's going to get plenty of it while performing these, so she needs to be careful. Otherwise, she may have another guy falling head over heels for her instead of you.

So, if you know a cute girl from your math class has been flirting heavily with one of your friends in front of you after football practice every single day, then you might want to make sure she's not actually seeking your attention instead of theirs.

Just try not to jump the gun on this one, as she might actually not be trying to make you jealous at all. You simply need to analyze carefully and cautiously and hope for the results to show themselves.

4. Has She Suddenly Upped Her Wardrobe?

Has your special lady friend been wearing a surprisingly large amount of makeup lately or purchased a new dress from the mall? Maybe she's been asking you about her recent outfits and putting her new fashion directly in your mind on purpose.

She wants you to notice how great she looks, and she needs your opinion on her clothes to see if it's working. Whether she's asking you for a compliment, or passively trying to flaunt her beauty around you, these are all signs that she's asking you if you like her.

If you show any physical attraction or attention to her, it'll give her all the signs she needs to pursue you as a relationship. However, just be wary that she isn't asking you for advice as a friend or colleague.

Sometimes, girls just need an extra opinion on something before they show off to the real man of interest, so be careful when judging too soon on her actions.

5. Look Out for Those Secret Hints

There are plenty of other things women do when they're highly interested in a guy. These actions range from hair twirling to open flirting, and it's not hard to discover their true intentions after becoming so obvious.

Give it some time and wait for the small hints, such as secrets among her friends, or a sudden interest in your friends and family. If she's going out of her way to insert herself into small parts of your life, then there's a huge sign that she's interested in you romantically as a partner.

Girls who like guys are often happier around them, and if she's been smiling around you for the past three hours even though you know for a fact she had a very stressful day, then that's a strong thing to look out for.

Maybe go out of your way and ask her friends or family if she's talked about you at all if you're feeling bold. If you show them that you have a similar interest in her, they may be very forward with any information regarding your lady friend. Be careful, though.

If you've been reading her signs the wrong way, then you might do the exact opposite reaction of your desired outcome by being so brash.

How to Improve Your Public Speaking Skills

Pick-up Lines and Opening Lines: What Are the Differences

Is Your Phone Date Catfishing You?